From saving to pay off your student loan to investing for the first time, we’ve heard it all here at The Plum Diary...and we wouldn’t have it any other way!

Sharing your achievements and experiences not only warms our hearts, but it makes our Plummunity stronger too 💜

The chances are, if you’ve been struggling to clear your overdraft, there’s another Plumster out there going through exactly the same thing.

This week we’re catching up with Holly, a 27-year-old health and safety consultant from Glynneath in Wales.

When Holly’s not visiting factories up and down the country, she’s been getting stuck into savings and investments.

Let’s find out how it’s been going...

How Plum can help even savvy savers set more money aside ⭐

We’ve said it before, but our Plumsters are very humble about their money management skills. According to our research, three quarters of our customers consider themselves to be “bad” or “average” at saving.

But when we sat down to chat to Holly, we discovered that she’s that rare diamond who truly believes in her personal finance know-how.

“I’m pretty good with money and I’ve always been really conscious about what I’m doing with it”. You go Holly! Glass half full all the way 🥛

With the COVID-19 pandemic forcing us all indoors, Holly even found new ways to save a few bob. “We used to eat out a lot, but I’ve learnt to cook. I’ve become more aware of money because of the pandemic”.

Mmm nothing beats a home-cooked meal, Holly...we might even have a recipe for Plum crumble we can recommend to you?

Discovering the benefits of a money management app: “I thought that’s such a cool idea” 💡

Although Holly is clearly a saving superstar, she has found it difficult setting some time aside to tuck away her money. “I’ve always put a bit away, but it was never consistent”.

When scrolling through her Instagram feed back in 2019, she came across an advert for Plum. Like our Plumster Sallie, who knows all about the power of Round Ups, this feature really struck a chord with Holly.

“It was the appeal of Plum calculating the top up and automatically putting that away. I thought that’s such a cool idea”.

Once enabled, our Round Ups feature automatically rounds up every purchase you make to the nearest whole pound. It then adds the extra cash into your Plum account, like in the good old days when you used to have a piggy bank 🪙

For Holly, having a say over what happens to this extra shrapnel made all the difference. “I know it’s only pennies, but they get lost somewhere. It feels nice that I actually have control over them”.

We agree with you there Holly. Round Ups collect what is effectively loose change, and most of us have already written off the amounts in our minds.

Since discovering Plum almost two years ago, Holly now keeps all of her savings there.

“I feel like it’s the best place for them because it’s away from the money that gets taken out in bills. When you have money in a bank account, it’s always sat there and you think ‘I’ll just take a little bit of it’. It’s nice to separate my savings and say ‘No, I’m not going to touch them’”.

As we’re always saying here at Plum, when savings are out of sight, they’re also out of mind 👀

Alongside making the most of our auto-stashing algorithm, Holly’s been comparing bills and switching home utility suppliers with our Lost Money tab.

“I used it to look at my gas and electricity, and, because of it, I’ve changed providers. I’ve saved quite a bit there definitely, and the process of switching was super easy. It just went straight through”.

She’s also been experimenting with Plum’s saving moods. By selecting a mood ranging from ‘Shy’ to ‘Beast Mode’, you can control how much our AI sets aside for you.

She’s now channelling an ‘ambitious’ mood, which means she’s tucking away 50% more than our AI’s baseline. And it shows... Holly has saved £2,000!

With her savings growing, Holly started thinking about how she could get a return on her money.

After doing her research into how the Plum investing platform works, and the risks involved when investing, she decided to take the plunge.

“I’d never touched any sort of investments. I didn’t know anything about stocks. I didn’t understand it at all, and had no idea what to do”.

“With Plum, it was a really good introduction to it, and it’s all really clear. It felt safe as I could put some money in, and, if I decided I didn’t feel too comfortable, I could bring it out easily. There weren’t all sorts of different hoops you had to jump through”.

Holly has even roped her Mum in on the action 👩 “I actually got my Mum to use Plum as well. We both had no idea about investments, and we thought ‘Okay, we’ll have a go at it’”.

The pair have both made a “little bit” from their investments, which Holly describes as “a pretty cool thing to be able to do”.

Holly’s plans to achieve her financial goals with the help of the Plum money saving app: “It’s a bit of a strange story” 🏍️

Now that Holly has mastered the saving and investing combo, she has big plans for her bucks.

“My boyfriend did something called the Dakar Rally. He’s a motorcycle racer. I used some of my savings that I’d built up with Plum to go to Saudi Arabia to support him before the pandemic”.

“He’s doing it again in January 2022, so I’m saving to go again and be his support crew for the whole two weeks instead of just a couple of days like last time”.

We’re sure you’ll have an incredible time Holly. We wish your boyfriend the best of luck 🍀

If you do choose to invest, please remember that your capital is at risk. 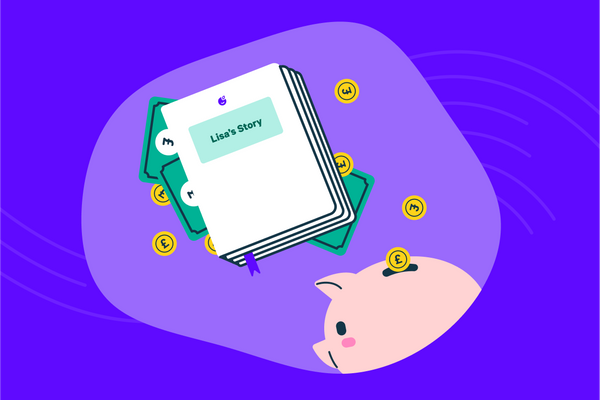 This week at The Plum Diary, we’re speaking to Lisa, who has stopped dipping into her savings and started smashing her financial goals with a little help from Plum.

Welcome to the next instalment of our Pride Reflection Campaign. This week we are speaking to Youtubers Rose and Rosie Dix about work, finance and their experiences as a same-sex couple 👩‍❤️‍👩