Whether you’re looking to save money so you can scale Everest or start investing for the first time, we want to hear all about it over at The Plum Diary.

This week we caught up with Dave, a 34 year old from Bournemouth, who started using Plum two years ago after turning his finances around 💪

From thinking he would “never be a saver” to having 10K in the bank, Dave spills the tea on how he stopped living in his overdraft and became financially better off ☕

Like many of us, money burned a hole in Dave’s pocket 🔥 He always thought “It would be nice to have some left at the end of the month, but, as it was only small amounts, it didn’t seem worth it”.

“I used to have quite a lot of debt and thought I’d never be a saver. Because of debt and my frame of mind about money, it was never a possibility”.

He had a loan, credit cards and an overdraft and decided enough was enough 🙅

“I worked out if I could consolidate all my payments into one payment, it would be cheaper. I paid off all my credit cards, all my overdraft, with one loan. It was quite a big loan, but it meant I was up £300 a month”.

Replacing multiple bills with a single monthly payment like this is known as debt consolidation.

While this strategy might not be suitable for everyone, it can help you simplify your budgeting, save money on interest charges and help you rebuild your credit score.

With his finances now in order, Dave thought “I just don’t want to be in the same position I was in before”.

When browsing online, he saw money guru Martin Lewis recommend Plum back in 2018. You haven’t aged a day Martin 😉

Dave decided “this would work” and gave it a shot. He started auto-stashing £15 a month, and, well, the rest is history...

Dave is now channelling an ‘ambitious’ savings mood and has £10K in the bank.

It’s safe to say that he and Plum are firm friends.“I like the updates. I think I actually look at it every day. It pulls me in”. Oh Dave, you’re making us blush 😊

He is even taking the 52 week challenge to new heights ⛰️

When 2020 drew to a close, Dave kept on saving and is currently on week 69 of the challenge. “I’m going to see how long I can go. We’ll see in three months’ time whether I still have it on”.

Having become such a diligent saver, Dave is now reluctant to spend his nest egg 🐣

“I’m at the point now where I don’t want to spend it [the £10K]. I could put it towards a house, but the property prices in Bournemouth are disgusting. It’s horrible. I think it’s really helped in this environment, knowing I have the money there in case something happens. Ideally when things open back up I want to do a nice holiday”.

If you’re considering a Vanguard SIPP, then a Plum Pension is an alternative that lets you top up or consolidate existing schemes into a handy app. 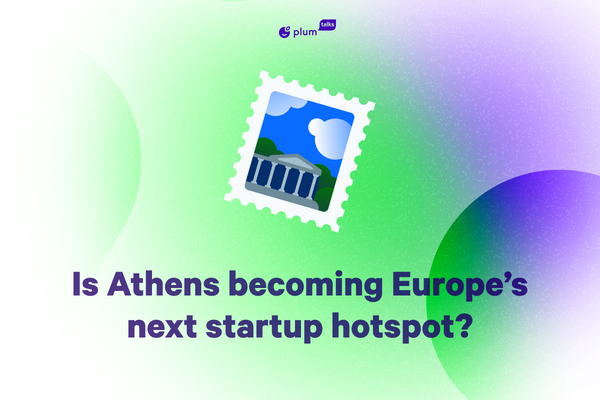 Athens might not be the first place that comes to mind when you think of European innovation in 2021. Yet the Athenian startup scene has been gathering pace for the past few years as our Plumtastic panel discussed.