Here at The Plum Diary, we really believe that sharing is caring 💞 Whether you’ve stashed away £10K, or are working to clear your overdraft, we want to hear all about your money journey.

For this week’s entry we’re taking a deep dive into saving, investing and pensions with Djenys, a 35-year-old executive assistant and office manager from London.

Although Djenys has only been using Plum for a few months, she’s already become a financial whizz. Let’s get stuck into her story.

Having a budget and sticking to it is hard work.

You have to decide on your strategy, track your spending and automate your outgoings every single month...and that’s not even taking into account the unpredictability of human nature.

Even though we have the best of intentions, we’re hard-wired to want a small reward today rather than a bigger one down the line 🍫

This struggle is something that Djenys knows all too well. “I’ve always found it difficult in terms of having a budget tracker and keeping to it. It’s like at New Year when you say you’re going to save, but it never goes to plan”.

Yet, while Djenys recognises that saving isn’t the easiest of feats, she’s determined to conquer it 💪

While Djenys was browsing on Twitter one afternoon, she came across Plum. “I’m a hypebeast, so with anything new I just jump on it”.

After using the app over the past few months, Djenys now keeps the majority of her savings in Plum. She particularly likes how our auto-deposits mean you don’t even have to think about tucking away a few pounds.

“You know when you see on your account transactions for ‘Plum Fintech’, you think ‘Oh, well that’s just my money’. It’s one of those things you don’t actually notice, like £40 here and £50 there, and then at the end of the month you’ve saved £150”.

To help grow her cash stash even more, Djenys is also making good use of some of Plum’s more advanced features, as well as our bill-switching service.

“I’ve ticked everything, and the Lost Money tab helps a lot because I go to my phone and I’m like ‘Look how much I can save’”.

Having maxed out on all of Plum’s saving features, Djenys felt she was in a secure position to start investing for the first time.

Like many of us, she’d previously found the world of stocks and shares to be “a headache”. “The terminology is complex. It was like, what do I do? What is a bond? It wasn’t appealing to me, so I wanted to stay away from it”.

With Plum’s investment platform, she felt able to take those first steps towards becoming the next Warren Buffett 👣

“I wanted to crawl before I walk. I read all the information, I read about the risks. Plum wasn’t telling me to put in £5,000. Their approach is all about starting small, and going slowly and steadily. I felt comfortable”.

It’s important to remember that if you do choose to invest, your capital is at risk because the value of your investment can go down as well as up.

Even today Djenys still can’t believe she’s taken such a big leap when it comes to managing her money. “I’m like who am I? I’m investing, you know?”.

Consolidating your pension with Plum 👵

As many of our hardcore Plumsters will know, our latest addition to the Plum family is our new Self Invested Personal Pension (SIPP).

And, for Djenys, it was like we had answered her prayers 🙏

“Consolidating my pension pots is something I’ve wanted to do for so long now, but then you talk to people and they’re like ‘You need a financial advisor’. It just put me off”.

“As I’ve been working for so long, I actually have several pension pots everywhere, so when I got an email from Plum to join the waitlist for the SIPP, I was like ‘OMG you’re listening to my thoughts’ and signed up for it”.

Now that Djenys has got her SIPP up and running, she’s been reflecting on how easy the process has been. “I never thought it would be so straightforward to consolidate my pension and invest it”.

By entering a few personal details, along with your past pension providers, you can create a Plum SIPP in just a few minutes.

That way you can view all your pension pots alongside your regular savings, spending and other investments, so they don’t get left behind as you’re working your way to Financial Independence Retire Early (FIRE) status 🔥

Understanding your money with Plum 📚

With her savings, investments and pensions all locked and loaded, Djenys now feels like a total boss.

“I think it’s been an amazing experience. I know it hasn’t been long, but it’s given me the confidence to explore things that I wouldn’t necessarily”.

“It makes you so excited. I’ve got a three-year-old who finishes nursery in September, so I won’t be paying that fee anymore. That money is going straight into savings and investments!”.

“It’s a learning process for some people and I’m one of those. I’m enjoying the information that Plum provides, especially on the investing side. I don’t have that foundation of financial literacy, and my mum didn’t have it either as a second-generation immigrant, so it wasn’t passed on to me”.

“I like to learn and I really believe it’s not too late. Sometimes we’re very hard on ourselves, especially me as an adult. I see myself at 35, 36 this year, and I should be X, Y and Z. In reality, I don’t have that foundation of financial literacy, so everything I’m learning is going to be passed on”.

We’re so happy to hear that Djenys! Keep up the good work raising the next generation of Plumsters 🌱

If you do choose to invest, please remember that your capital is at risk. 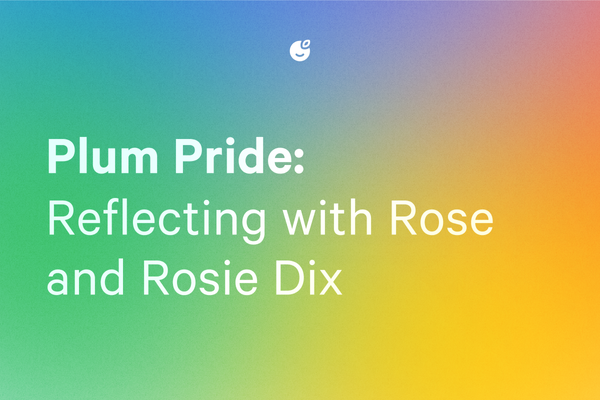 Welcome to the next instalment of our Pride Reflection Campaign. This week we are speaking to Youtubers Rose and Rosie Dix about work, finance and their experiences as a same-sex couple 👩‍❤️‍👩 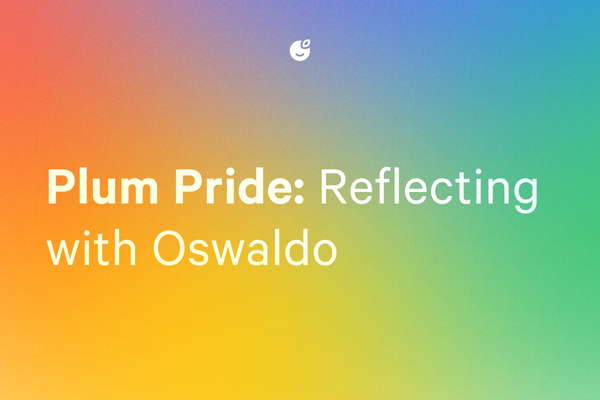 Welcome to the next instalment of our Pride Reflection Campaign. We have been speaking our LGBTQ+ colleagues to highlight what it's like to work at Plum and what Pride Month means to them 🏳️‍🌈