This week at The Plum Diary we’re going on holiday! We’ve packed our sun cream, booked our plane tickets and converted our pounds to euros.

Now that Plum has launched in France, Ireland and Spain, we thought it was time to catch-up with some of our Plumsters on the Continent.

For our first stop, we’re heading to Ireland ☘️ to chat to Ronan, a 41-year-old Disability Case Manager from County Meath.

Although Ronan describes himself as a “really bad saver”, he’s tucked away more with Plum’s help in the past three months than he managed over the entire previous decade.

Let’s take a closer look at how he did it 👇

“We didn’t really save much in the past” 💸

While many of us have good intentions to save a lot of money, it’s often easier said than done.

Whether it’s figuring out how much you should set aside or navigating a budget, there are a lot of obstacles in our path to being better off.

For Ronan, there were two main hurdles he struggled to clear 🏃 He describes the first one as having “a lot of bad habits around saving”.

In behavioural science circles, this is known as “present bias” and it’s what makes saving so difficult for all of us.

We’re naturally inclined to want a small reward today, rather than a bigger one further down the line...which doesn’t bode well for our finances 🛍️

On top of having to overcome the complexities of human nature, Ronan thought that saving just wasn’t possible in his circumstances.

“I felt we just didn’t have enough income to save, because at the end of every month we were either tight or overdrawn”.

He mostly relied on traditional saving methods, like making direct debits or keeping physical cash (which he would often spend), but that was before he found Plum.

How a money saving app helped: “I’m a sucker for a new app” 📲

Back in November 2020, Ronan was reading the newspaper and stumbled across Plum.

“I’d seen the UK version before because when I read about it, I immediately went and downloaded it”.

A keen gadget-lover 🤖 Ronan describes how part of the draw to Plum was Open Banking. This directive means banks are now obligated to let you share your account details with organisations that you choose.

“I like the interoperability between banks and apps. Traditionally, banking services have been locked down, but the fact that I could load up all my accounts in Plum was cool”.

The feeling you get when you see your Plum balance: “It’s like magic” 🪄

We’re not ones to blow our own trumpet here at Plum, but when Ronan described the app as “literally the perfect thing” it made our day 💜

He’s particularly pleased with how Plum’s automation has made saving a lot more convenient.

“I don’t even need to do anything except set it up once. I’m on my phone a lot anyway, so a couple of minutes spent setting up Plum is grand. A few days later, it’ll already have saved me around €6”.

After steadily building up his stash for three months, Ronan now has €500 in the bank. That’s more than he’s saved in the past decade 🎉

According to Ronan, “this a hundred percent would not have happened without Plum”.

“I would’ve either spent the money on something else when I had €50 saved, or fallen back into thinking we can’t afford it. I also probably wouldn’t have bothered saving because I would have to set up a direct debit. Even though these are all tiny things, I want convenience and I suppose I’m really lazy in that regard”.

While automating direct deposits is a pretty chill way to tuck away some extra cash, it’s also proven to help you save more in the long run.

How Plum savings can help: “There’s a really nice coffee machine I’d like to buy” ☕

Now that Ronan’s €500 better off, he’s chosen to invest his savings as part of his broader personal finance strategy.

While it’s worth bearing in mind that your capital is at risk if you invest, it can potentially help you grow your money over time. If you’d like to find out more about how it works, you can check out our Investment Academy series here on the Plum Basket.

Investments aside, Ronan has jumped straight back on the saving bandwagon.

Almost two and a half months since we last spoke, he has tucked away a further €400 with Plum. And he’s decided to spend this on achieving a pretty big goal...buying a new coffee machine!

Now that’s been ticked off the bucket list, Ronan has set his sights on an even bigger challenge. He plans to put more money aside so he can return to Germany and hit the Nürburgring race track with his refurbished Volkswagen Golf 🏎️

We hope you have a great time when you get there Ronan...can we call shotgun next time?

Do you have a Plum story to tell? Let us know by emailing press@withplum.com

Tackling your finances can be rewarding, and budgeting app can save you time and effort. We're showing the best ways to manage money with a budgeting app! 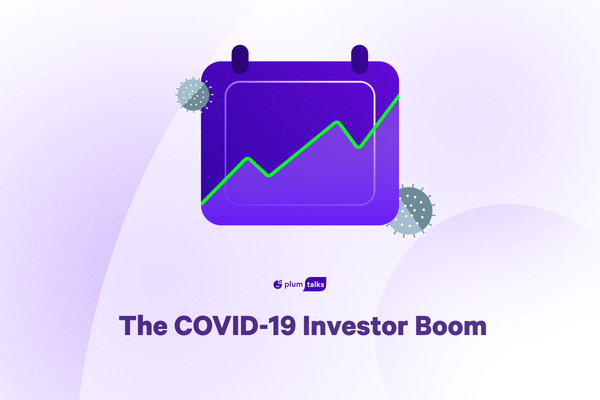 For our third Plum Talk, we took a deep dive into investor behaviour. Our panel unpacked all the major trends of the COVID-19 pandemic, but what does the future have in store? Let’s find out...